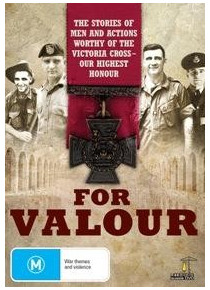 This ' For Valour ' DVD is a documentary about Australians who have been bestowed Australia's highest honour for military gallantry - the VC medal Victoria Cross.  A 2009 Screen Australia Documentary 62mins duration. All regions Australian Format DVD but will work in all countries .

The Victoria Cross is the most coveted and honoured decoration available to members of the Australian Defence Force. Journey down the Remembrance Highway, from Sydney to Canberra's Australian War Memorial where 22 ordinary Australians are remembered for their extraordinary deeds of courage and sacrifice.

Winners of the Victoria Cross, their stories are inspiring, their legacy indubitable. From as far back as the 1857 Indian Mutiny 96 Australian soldiers have received this honour - among them Neville (later Major General) Howse who faced enemy fire during the second Boer War to rescue a fallen trumpeter.

Despite being shot in the neck and chest John Edmondson risked his life at the siege of Tobruk to aid an officer in distress, and during the Vietnam War Keith Payne entered enemy territory to aid the rescue of "about 40" injured and lost soldiers.

Featuring dramatic re-enactments and insightful interviews with war historians FOR VALOUR represents an outstanding triumph of will, exploring the mateship, camaraderie and personal courage of the defenders of our great nation.