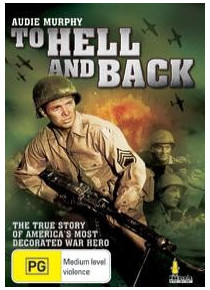 The remarkable World War II hero Audie L. Murphy (1924-1971), the most decorated soldier in American history, portrays himself in this 1955 action classic based on his 1949 autobiography.

With Murphy re-creating his own actions and movements in key battles, this devastating chronicle of war follows Murphy and his mates from North Africa to Berlin, with the war hero performing Herculean deeds on the battlefield.

Audie's likability and breathtaking heroics, played out through highly authentic battle scenes, made To Hell and Back the highest grossing film at Universal until "Jaws" twenty years later. It was also a huge hit when released in Australia cinemas, and the biggest opening in the history of Sydney's Capitol Theatre. In the great tradition of All Quiet on the Western Front, this is epic war action at its finest.﻿

Said to be the greatest war movie ever made mainly attributed to the fact that the real hero portrays himself in the movie about him - quite unique.

In real life, Murphy was credited with destroying six tanks in addition to killing over 240 German soldiers and wounding and capturing many others. His principal U.S. decorations included the Medal of Honor, Distinguished Service Cross, two Silver Stars, the Legion of Merit, two Bronze Stars with Valor device, and three Purple Hearts. Murphy participated in campaigns in North Africa, Sicily, Italy, France and Germany, as denoted by his European-African-Middle Eastern Campaign Medal with one silver battle star (denoting five campaigns), four bronze battle stars, plus a bronze arrowhead representing his two amphibious assault landings at Sicily and southern France. During the French Campaign, Murphy was awarded two Presidential Citations, one from the 3rd Inf, Division, and one from the 15th Inf. Regiment during the Holtzwihr action.﻿

Audie Murphy these are the awards:
﻿