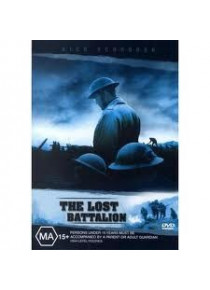 Lost Battalion by Foxmovies : this is a DVD Australian region 4 Pal Format.

The Lost Battalion is the name given to nine companies of the United States 77th Division, roughly 554 men, isolated by German forces during World War I after an American attack in the Argonne Forest in October 1918. Roughly 197 were killed in action and approximately 150 missing or taken prisoner before 194 remaining men were rescued.

Major Charles White Whittlesey, Captain George G. McMurtry, and Captain Nelson M. Holderman received the Medal of Honor for their valiant actions. Whittlesey become a National Hero he was also recognised by being a pallbearer at the ceremony interring the remains of the Unknown Soldier. The war experience weighed heavily on him. Whittlesey disappeared from a ship, in what is believed to have been (and was reported as) a suicide, in 1921.