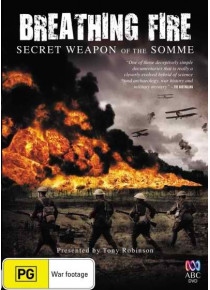 BREATHING FIRE THE SECRET WEAPON OF THE SOMME : DVD

BREATHING FIRE THE SECRET WEAPON OF THE SOMME : DVD

In this DVD a team of experts excavates at Mametz, France﻿ on the Somme WW1 Battlefield in search of a top secret tunnel and a giant 60-foot flame-thrower. Military Historian Peter Barton, archeologist Tony Pollard and Time Team Presenter Tony Robinson travel to northern France to find secret tunnels and a giant flamethrower lost for almost a century.

Built for use during the opening day of the Battle of the Somme, the bloodiest clash of WW1, this 60 foot weapon of terror fired a blast of flaming diesel oil over 100 yards long. Barton hopes to recover the machine and with the help of the British Royal Engineers, build a working replica at a specially built test site. For the first time in almost a century, this mechanical dragon will roar once more.﻿

The flamethrower during WW1 was called Livens Large Gallery Flame Projectors
they were largely experimental flamethrowers used by the British Army in World
War I. They were named after their inventor, a Royal Engineers officer William
Howard Livens. Four were deployed in 1916 the Battle of the Somme and one in
1917 in an offensive near Diksmuide, Belgium. Two of the weapons at the Somme
were destroyed by German shelling before they could be used, but the other two
were used at the start of the offensive. Their use is a possible explanation
for helping the success of the British in those particular sectors of the front.
The weapons were 56 feet (17 m) long, weighed 2.5 long tons (2.5 t), took a
carrying party of 300 men to bring the pieces to the front line and assemble
it and it was operated by a crew of eight. The weapon was designed to be used
from a shallow tunnel dug under no man's land. The weapon consisted of a long
chamber containing the fuel, a 14-inch (360 mm) diameter pipe and a nozzle on
the surface. A piston-driven compressed gas was pushed into the long fuel chamber
– and fuel was forced out of the surface nozzle, ignited and directed to the
target. The maximum range of the weapon was 30 to 40 m (100 to 130 ft)