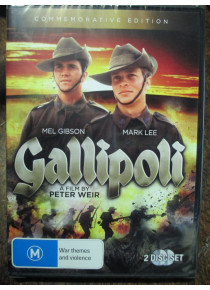 ﻿Mel Gibson delivers an electrifying performance in director Peter Weir's compelling story of friendship and adventure between two Australian Soldiers in 1915.  The movie depicts two members of the 10th Australian Lighthorse. Their fictional endeavours leading up to the reality of landing at Gallipoli and the climax Charge at the Nek. The movie has become a legendary World War 1 epic.
Special with this DVD Includes the following Rare Doco
"Boys of the Dardanelles" see second video sample..