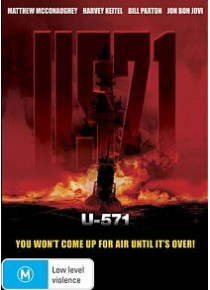 This war DVD based on true events of the Capture of the German Submarines U-110 and  U-505 just before the Normandy Landings.

In this World War II action thriller, American reconnaissance agents learn that a German submarine is sinking. The doomed ship carries an Enigma Machine, a special coding device that allows high-level Axis forces to send messages that can't be read without a similar encryption mechanism. Obtaining a working Enigma device would be invaluable for the Allied war effort, so a U.S. sub is sent out to rescue the machine. However, German forces have already picked up the sub's distress signal and are en route to rescue their comrades. U-571 features a distinguished cast, including Matthew McConaughey, Bill Paxton, Harvey Keitel, and Jon Bon Jovi. ﻿