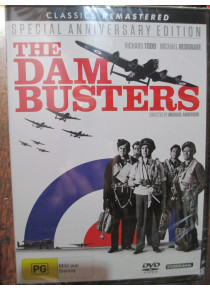 This Dvd is the Royal Air Force Classic The Dam Busters a 1955 British WW2 film starring Michael Redgrave and Richard Todd and directed by Michael Anderson. The film recreates the true story of Operation Chastise when in 1943 the RAF's 617 Squadron attacked the Möhne, Eder and Sorpe dams in Germany with Barnes Wallis's "bouncing bomb". The film was based on the books The Dam Busters (1951) by Paul Brickhill and Enemy Coast Ahead (1946) by Guy Gibson the Commander of 617 SQN.﻿

Publication Date:
2018 Remastered of the Classic
Special note:
This DVD is brand new, supplied in factory plastic seal. It has been sourced from the Australian Distributor. Made professionally!
DVD Information:
Australian PAL Region 4 B&W - 1954 movie only ever Made in B&W
DVD Duration Time minutes:
120
Movie Format:
DVD
DVD Special Features:
Several Special Features about the movie