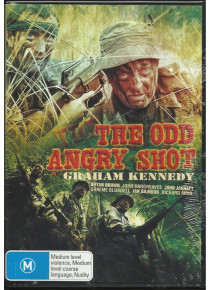 This Vietnam war movie DVD released in 1979 is based on the novel of the same name by William L. Nagle.
The Odd Angry Shot is a film following the experience of Australian soldiers during the Vietnam War. It traces the departure and tour of duty of an Australian Special Air Service Regiment reconnaissance team.

The film avoids much of the political comment on Australia’s involvement in Vietnam; a theme that became more popular in the 1980s when Hollywood began to explore the rights and wrongs of the Vietnam War.

The film centres on the experiences of the soldiers away from the battle field, spending the bulk of their time playing cards, smoking, drinking beer, nursing their tinea, making jokes about sex and having some friendly competition with the American forces. The film also contains some small scale battle scenes.

When the men return to Australia, they reflect on how both they and the general Australian society have changed. The movie was filmed at the Australian Army's Jungle Warfare Training Centre in Canungra, Queensland. During the Vietnam War, all Australian soldiers - including draftees - who were to be deployed to Vietnam went through four weeks' specialized training in Canungra. The Iroquois ('Huey') helicopters﻿ become a icon of the war and every movie made about the Vietnam War.