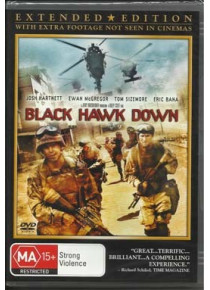 This DVD is the extended special edition which has an extra 8 minutes of footage not previously released in the cinema or DVD version. Also has the documentary ' Frontline: Ambush in Mogadishu ' the story of the real Black Hawk Down soldiers.

In 1993, an elite group of American Rangers and Delta Force soldiers are sent to Somalia on a critical mission to capture a violent warlord whose corrupt regime has lead to the starvation of hundreds of thousands of Somalis. When the mission goes quickly and terribly wrong, the men find themselves outnumbered and literally fighting for their lives.﻿

Shortly after the assault began, Somali militia and armed civilian fighters managed to down two UH-60 Black Hawk helicopters. The subsequent rescue operation to secure and recover the crews of both helicopters drew the raid, intended to last no more than an hour, into an overnight standoff in the city.

The battle resulted in 18 U.S. deaths, 80 wounded, and 1 helicopter pilot captured among the raid party and rescue forces, including Pakistani and Malaysian troops. American sources estimate between 1,500 and 3,000 Somali casualties, including civilians; SNA forces claim only 315 casualties, with 812 wounded. ﻿