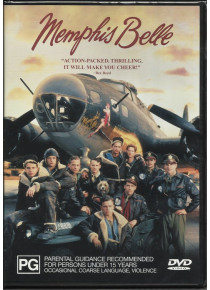 Memphis Belle is a 1990 film directed by Michael Caton-Jones and written by Monte Merrick, starring Matthew Modine and Eric Stoltz and introducing Harry Connick Jr. in his screen debut. It is a fictionalization of the 1943 documentary Memphis Belle: A Story of a Flying Fortress by director William Wyler, about the 25th and last mission of an American B-17 bomber, the Memphis Belle, which was based in England during World War II.