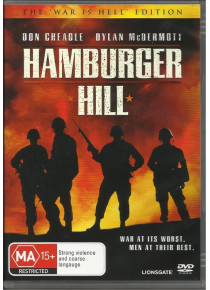 This DVD Titled Hamburger Hill is a 1987 American war film about the actual assault of the U.S. Army's 3rd Battalion, 187th Infantry Regiment, part of the 3rd Brigade, 101st Airborne Division 'Screaming Eagles', on a well-fortified position, including trenchworks and bunkers, of the North Vietnamese Army on Ap Bia Mountain near the Laotian border. American military records of the battle refer to the mountain as 'Hill 937', its map designation having been derived from its being 937 meters high.﻿

This edition has 2 Special features:
1. Hamburger Hill the Appearance of Reality
2.Medics in Vietnam