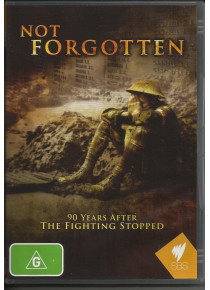 Australia Not Forgotten - 90 Years After The Fighting Stopped

From a population of just over 4 million, 324,000 Australian men served overseas in WW1. Some 61,700 never came home. Australia suffered the highest casualty rate in the British Empire forces. And every single one of them was a volunteer.

There are so many First World War Memorials in this country that it is easy to stop seeing them. They have become so much a part of the landscape that you can walk past them without registering what they are, or stopping to think why they were originally put up. It is only when you start looking out for them that you realize the scale of this act of commemoration. Thousands of memorials to the dead represent a massive and unprecedented outpouring of national grief.

These memorials and monuments stand as landmarks to a defining period in Australian history – but one which is slipping away from popular memory and into ancient history.
Presenter Mark Lee (best known to audiences as the young lead in the 1981 feature film “Gallipoli” also starring Mel Gibson) takes the memorials as his starting point, researching individual stories to turn names and statistics into people with faces and personal histories.

Tracking down their descendants, he unveils a series of moving portraits, exploring the scale of the loss, the experience of grief, and the motivations which took so many Australians to war on the other side of the world.

Mark's journey takes him across Australia in search of unique stories of the tragic cost to Australian families during and for years after the war. There are stories of great sacrifice like the Seabrook Family who lost three sons on the same day and in same Battle - Pozieres. Mark also goes to Ballarat to investigate why so many Ballarat boys died compared to the national average.

Many other stories are told during the 84 minutes running time.