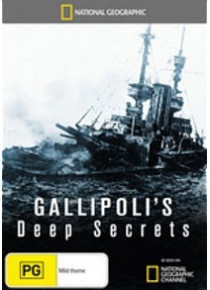 On his latest underwater quest the discoverer of the Titanic, Dr Robert Ballard, examines one of the greatest turning points of the 20th century. In what was to become one of the bloodiest and most futile battles of the modern era, Ballard wants to examine how it went so horribly wrong. The answers lie not only on the battlefields but beneath the waves. Ballard reveals the story of Gallipoli as it has never been told before, through its wrecks. Diving into ancient waters off Turkey, Ballard uncovers the wrecks where the might of the British Navy was outwitted by a weakened Ottoman Empire, unleashing a terrible carnage where hundreds of thousands of young lives would be wasted. But amongst the tragedy Ballard discovers heroes including a one Australian submarine that achieved what no submarine had ever done before. On this extraordinary and poignant journey, Ballard unlocks Gallipoli's deep secrets.
Click to see the video tab above to see trailer of this doco.
Also Includes the Bonus feature length Doco Sinking of the Lusitania
SINKING OF THE LUSITANIA: On the 7th of May 1915, 1,198 people were killed on board the British steamship RMS Lusitania when it was torpedoed and sunk by a German u-boat in the waters off the British Isles. The incident is often viewed as a catalyst for the United States declaring war on the German Empire and entering the first World War. Of the 2,000 passengers aboard that day, many were well-to-do Americans, which continues to fuel the controversy that surrounded the incident. Could the British have placed the ship in danger deliberately to incite the wrath of the United States against Germany? Dr. Robert Ballard, a famed marine explorer best known for his discovery of the remains of the RMS Titanic and the German battleship Bismarck, leads a quest to find the facts behind the Lusitania disaster.