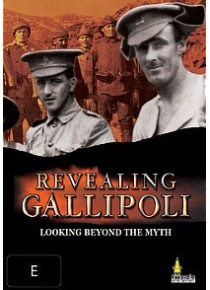 An award-winning, in-depth look at what happened on Australia's most revered place of battle. Revealing Gallipoli tells the many remarkable stories of hardship and survival from several different perspectives, taking into account the circumstances and revealing the brutality of warfare.

Three engaging presenters, Australian Dr. Peter Stanley, Turk Savas Karakas, and Irishman Prof. Keith Jeffrey roam the battlefields and detail the stories from the places where the decisions were made and the battles took place. With the use of unique three-dimensional photography and maps, listening to vivid accounts of the young men who fought there, Revealing Gallipoli brings the battle alive from each perspective in an effort to fully understand the conflict.

Comprehensively documenting the campaign at Gallipoli during the First World War, Revealing Galliploi investigates the very beginnings at the War Council of London, through to the ensuing naval attack, the many subsequent landings and ultimately when Allied troops silently withdrew in the dead of the Turkish winter.

A rich historical resource, capturing the essence of the conflict and the spirit of the soldiers, Revealing Gallipoli is a valuable insight into the Australian War experience.﻿