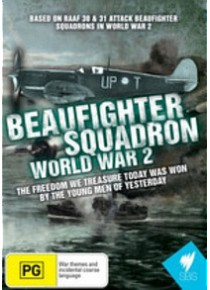 It tells the tale of the World War 2 Beaufighter Aircraft known by the Japanese as Whispering Death, a fast heavily armed and almost indestructible aircraft, and its indefatigable Australian crews.Together they helped tip the balance against the invading Japanese during the dark days of 1942-43, once and for all ending the Japanese territorial ambitions toward New Guinea during the crucial Battle of the Bismarck Sea.

The pivotal role played by Australia's (at the time) large and efficient aircraft industry is documented on archival film, along with the RAAF men of 30 and 31 Squadrons who flew the Beaufighters from bases in the Northern Territory and the frontline at Port Moresby and the islands to the north.Age is rapidly wearying them, but several of the key players have told us their stories. We share the experiences of ground and air crews as they fought, lived and flew sorties against the enemy, including Milne Bay, the first time the Japanese were defeated on land.