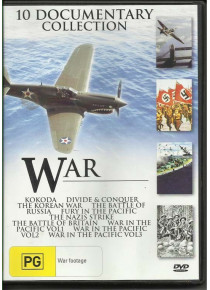 WAR 10 Documentary Collection ' most made during WW2 by several Production Companies. This DVD documentary is massive in content with a total running time of 788min.

See pic above of reverse dvd case which lists what is included on this 4 disc set.
Please note the first documentary " Kokoda The Stairway To Hell "which was made in the 80's including footage filmed in 1942 during the Battle of Kokoda. It is 100% original and shows the Australian Kokoda advance during July 1942. It was during July that the B Company of the 39th Battalion (the Chocos) confronted the forward elements of a Japanese Regiment 144th (I think) on the Kokoda Trail. Also makes reference to the other Chocos Battalions 53rd NSW and 49th Qld . These were the Militia Battalions that were rushed to New Guinea to slow the Japanese advance across that country. It was feared if Port Moresby fell that the town could be used for land based aerial bombing of the Australian mainland to support a Japanese invasion.
Click on videos tab above to see Trailer of the DVD.
The rest of the DVD covers real footage of Battles Battle of Britain Dunkirk Korean War Russia WW2. Importantly for those interested in the Foxtel series Pacific it includes the actual footage of most of the Battles depicted in that series Iwo Jima Tarawa New Britain Okinawa etc and more