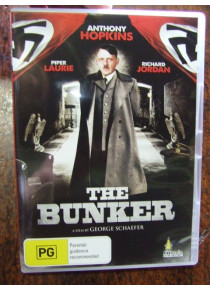 The Bunker the Final Days of Adolf Hitler - DVD 145 minutes

James O'Donnell was a soldier with the US Signal Corps but at the end of WW2 he took up a position with Newsweek Magazine. His assignment was to go to Berlin and find out as much as he could about Adolf Hitler's and Eva Braun's last days. It become a lifetime obsession which culminated in the writing of a book which this historical portrayal is based. Anthony Hopkins was awarded an Emmy for his portrayal of Adolf Hitler.﻿