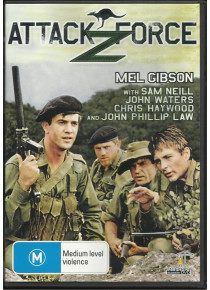 Captain P.G. Kelly (Gibson) leads a team from the elite Z Special Unit. Z Special Unit often known as Z Force, was a joint Australian, British and New Zealand commando unit, which saw action against the Empire of Japan during World War II. Its main brief was for reconnaissance and sabotage, today its role is taken by the Special Air Service Squadrons of Australia and New Zealand respectively.

Attack Force Z (alternatively titled The Z Men) is a 1982 Australian World War II film, directed by Tim Burstall. It is loosely based on an actual event that took place during World War II, and was filmed in Taiwan jungles in 1980. It was screened at the Cannes Film Festival on 18 May 1981. Variety Magazine at the time reported on the film as being,"A well-paced, finely acted war film that's not much short of super!"

The film is noted for starring Mel Gibson and Sam Neill, who were relatively unknown (in the U.S) at the time but who went on to become international stars.

Special features include: 'The Z-Men DeBriefed' a new 25 minute interview with Actors and Producer.