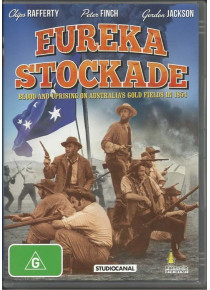 The Eureka Rebellion of 1854 was a historically significant rebellion of gold miners of Ballarat against the colonial authority. The Battle of Eureka Stockade was fought between miners and the Colonial forces of Australia on 3 December 1854 at Eureka Lead and named for the stockade structure erected by miners during the conflict.Resulting in the deaths of at least 27 people, the majority of which were insurgents, it was the most significant conflict in the colonial history of Victoria.
Starring Chips Rafferty as Peter Lalor the leader of the Rebellion.﻿