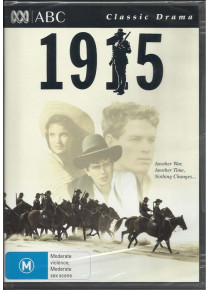 This DVD is a Mini series made in 1982 by the Australian ABC network. It was based on the popular novel ' 1915 ' written by Roger McDonald. Depicts the Civil and Military life of a group of young Australians from Forbes NSW. The Boys joining the Lighthorse in 1914 and some of the girls ( Sigrid Thornton ) joining the Red Cross. Excellent period details not as well known as the  miniseries ' Anzacs ' shown on the 9 network latter in the 1980's. Interesting that some of the Actors starred in both productions.
353 minutes Duration 4:3 Aspect starring Sigrid Thornton, Andrew McFarlane, Jackie Woodburne, Scott Burgess, Scott McGregor, Ilona Rodgers

Publication Date:
1982
Media is Pre-Owned
This DVD is Pre-owned - It Is in Near New Condition and has been tested and guaranteed to work
DVD Information:
Australian Region 4
DVD Duration Time minutes:
2 disc set 353 minutes
Movie Format:
DVD 4:3 aspect Pal Format