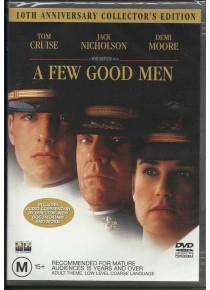 A Few Good Men - You Can't Handle The Truth

Colonel Nathan R. Jessep ( Jack Nicholson ) under the ' Code Red ' grill from a young brash Navy lawyer "Danny" Kaffee ( Tom Cruise ) .
In 2005, Nicholson's reading of the line "You can't handle the truth!" was voted the twenty-ninth greatest American film quote of all time and in 2008 the film was voted the fifth best Courtroom Drama.﻿