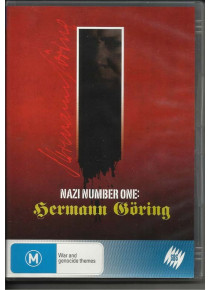 This DVD duration 156 minutes, is an in-depth study of Hitler's Number One Hermann Goring - much decorated World War One Air Ace. The latest in Guido Knopp's analysis of the Nazi era. Goring was the affable face of Nazism, hugely popular in the 3rd Reich, yet he signed off on every anti-Semitic law and genocidal command and the allies sentenced him to death as Nazi Number One. This film interweaves newly discovered colour home films shot by Goring himself, with archive material and newly-shot sequences to depict his rise to the top of the Nazi party and how power and luxury turned him into a lethargic, drug-addicted megalomaniac.