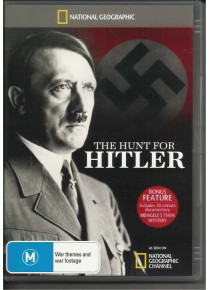 With shells crashing around his bunker and planes droning overhead, Adolf Hitler faced the reality of defeat and took his life. But then his body disappeared mysteriously and decades later we learn that Soviet leader Joseph Stalin concealed his body. NGT uses forensic science and insight from interviews with leading historians and eyewitnesses to explore what happened to Hitler and the reasons behind the Soviet's deception.

This DVD also includes the Bonus  Menegele's Twin Mystery which looks at the bizarre medical experiments undertaken by Nazi war criminal Josef Mengele at Auschwitz Concentration Camp . Also investigates what happened to Mengele after the war..﻿
click on video tab above to see trailer for this doco﻿