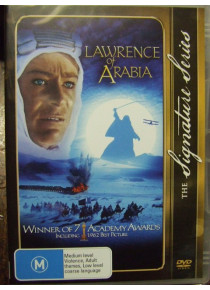 Director DAVID LEAN presents a heroic true-life adventure in this dramatic portrait of famed British officer T.E. LAWRENCE. Assigned to Arabia during World War 1, Lawrence (played by PETER O'TOOLE in the role that shot him to stardom) unites the warring Arab tribes and daringly leads them on to defeat the ruling Turkish Empire in brilliant victories waged under extreme desert conditions - of course with a 'bit' of help from the Australian Light Horse.