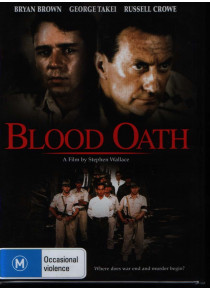 Australian Made in 1990, the feature film Blood Oath starred Russell Crowe (this was his debut Film) and Bryan Brown . The movie is based on the real-life POW history and resulting trial of Japanese soldiers for war crimes committed against mostly Dutch Australian POW on Ambon Island.

The film was the idea of Brian Williams, who was the son of Captain John Williams, he had prosecuted Japanese officers in charge of the POW camp at Ambon Island Camp during the WW2. In WWII AIF troops were sent to help garrison the island of Ambon, which lies approx midway between Borneo and New Guinea. The island is now part of Indonesia but was in the war years a Dutch Territory. It was an important air and sea link between Australia, and New Guinea.

The airfield at Laha, and the harbours of Ambon and Binnen Bays, were considered to be of vital significance to the Allies. The Australian 2/ 21st Battalion , with supporting units and a detachment of Lockheed Hudson bombers from RAAF No. 13 Squadron , landed at Ambon in December 1941. This combined unit, known as “ Gull Force ”, reinforced the existing local garrison of 2,600 men, and was placed under the overall command of Dutch Lieutenant Colonel J.R.L. Kapitz. Following intensive air attacks in late January 1942, the Hudsons were withdrawn, leaving the troops without support. The Japanese invasion on 29–30 January, supported by heavy air and sea bombardments, quickly overwhelmed the defenders, who surrendered on 3 February.

The small force of about 300 men defending the airfield at Laha were summarily executed by their captors, and buried in mass graves. The fate of these men was not discovered until after the war, while the remainder of Gull Force endured a captivity so harsh that nearly 75 percent of them died before liberation. This DVD duration for the feature is 108 minutes, also has 3 Special features included about Ambon Island - important Veteran POW interviews.