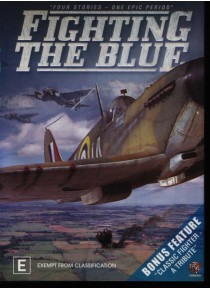 A military history documentary series featuring stories of human interest from the summer of 1940 to the winter of 1941, exploring the courage and resilience of the human spirit during the Battle for Britain.
Veterans of the Battle from all over the globe including Australians explain what it was like to live through this fundamental conflict. Featuring unseen footage from the 1969 feature “The Battle of Britain”, combined with CGI and re-enactments, Fighting The Blue is the last opportunity to film stories from people who came from around the world to fight for Britain. These stories are unique – no air battle will ever be fought like this again. ﻿
See DVD Reverse for the docoumentaries included.