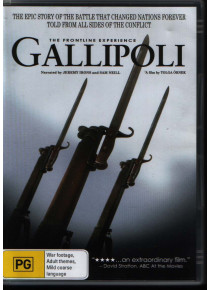 DVD titled 'Gallipoli The Frontline Experience '. As screened on Foxtel's The History Channel is a documentary of Turkish, Australian and Allied's Battle during the Gallipoli Campaign.

Narrated by both Jeremy Irons and Sam Neill the program was acclaimed with 4+ star ratings when released. Numerous historian interviews from Australia, Turkey and UK provide expert advice. A powerful depiction of the Australian Landing and overall Battle at Gallipoli.

Peter Thompson Channel 9 Presenter, said the program was 'a revelation...a superbly made film.'