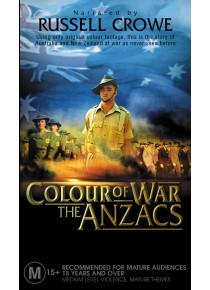 The Colour of War tells the story of Australia and New Zealand at war as never seen before.This three-part series paints a vivid picture of the Australian and New Zealand troops from the build up to World War II to the end of the Vietnam conflict. Rare newsreels, home movies and compelling first-hand accounts capture the thoughts and feelings of people caught up in history and the moods of the two countries as they prepared for international conflict.