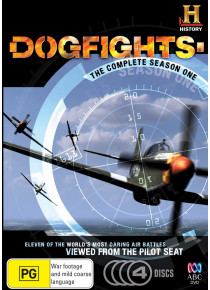 Legendary aces tell their own stories. Magnificent CGI and archival footage puts you in the cockpit. This is as close to the action as you can get without bailing out! Dogfights - The Complete Season One 4 discs. Fly alongside the world’s most accomplished pilots. Re-creations and computer simulations combine with authentic battle footage. All eleven episodes from the first season plus exclusive bonus features. Ever imagine what it would be like to participate in the most historic air battles of all time? Imagine no more. DOGFIGHTS puts you in the cockpit to re-create famous air-to-air engagements. Computer graphics, animation, firsthand accounts, and archival footage make these thrilling and dangerous dogfights all too real. The original pilots themselves narrate these accounts, illuminating the capabilities and histories of their magnificent aircraft, the enemies they faced, and the realities of life as a fighter pilot. Filled with astounding state-of-the-art CGI technology, all eleven episodes of the first season of DOGFIGHTS recreate some of the most thrilling and captivating life-or-death battles ever fought. Harnessing the technology from the latest cgi video game flight simulators this puts the viewers behind the cockpit pitted against enemy aircraft in 11 of modern historys greatest air battles.﻿