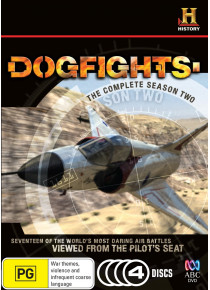 High above the ground at speeds reaching thousands of kilometres per hour fighter aircraft face off in some of the most intense battles in the history of warfare. HISTORY brings these battles to life in Dogfights a riveting documentary series that follows the development of air combat from the planes of the First World War to showdowns between the most cutting-edge aircraft flown today. The second season of this wildly popular series features first-hand accounts of the flying aces themselves combined with rare archival footage and state-of-the-art CGI graphics. Each air battle is recreated in stunning detail putting viewers in the cockpit facing the enemy. From Fokker trip lanes and SE5s duelling over Belgium and F86s and MiG-15s battling in the skies above North Korea to World War II's P-51 Mustang and the American F-15s that fought in Operation Desert Storm Dogfights: The Complete Season 2 puts viewers right in the cockpit to relive 17 of modern history's greatest battles.