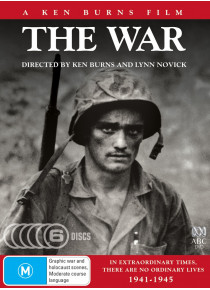 The War, produced by Ken Burns and Lynn Novick, examines the myriad ways in which the Second World War touched the lives of every family on every street in every town in America. By telling the stories of ordinary people in four quintessentially American towns – Waterbury, Connecticut; Mobile, Alabama; Sacramento, California; and the tiny farming town of Luverne, Minnesota – the series will portray this enormous worldwide catastrophe on an intimate, human scale.

The War will intertwine vivid eyewitness accounts of the harrowing realities of life on the front lines with reminiscences of Americans who never left their home towns, and who tried their best to carry on with the business of daily life while their fathers and brothers and sons were overseas.The film will honor and celebrate the bravery, endurance, and sacrifice, of the generation of Americans who lived through what will always be known simply as The War.

Bonus  - The making of The War featurette Messages from Ken Burns﻿