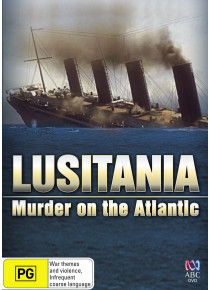 Lusitania: Murder on the Atlantic﻿ DVD

These are the words with which American men were urged to enlist for the First World War. The sinking of this great liner was an event which provoked outrage on an unprecedented scale, marking a pivotal moment in the war. In 1915, it was the fastest, biggest and most glamorous ocean liner in the world, plying the Atlantic between New York and Liverpool.

This dramatised documentary retells the story of the Lusitania's fateful voyage, when the liner, on route to the port of Liverpool, was torpedoed off the south coast of Ireland by a German U-Boat. Its demise was rapid sinking in just 18 minutes, with a catastrophic loss of life. Over 90 years later mystery still surrounds the atrocity. Was the ship as innocent as she seemed? Had the British government secretly used a passenger ship to carry explosives? Worse still, had they deliberately sacrificed the Lusitania to bring America into World War One? Now after painstaking research and the discovery of new evidence, this film can finally answer the questions. Bringing to life events on board both vessels, the film reveals how the political and intelligence communities failed to stop the tragedy.﻿