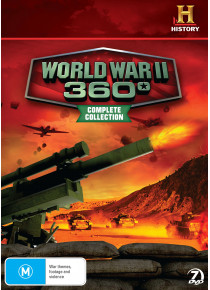 A HISTORY™ Channel presentation, Battle 360 the first series, premiered on February 29, 2008, the first episode had 1.8 million viewers - making it 2nd highest rating of any History Channel program at that time.
The 1st series chronologically follows the great battles of the Pacific war. It does this by focusing on the USS Enterprise aircraft carrier. The program also explores the command and broader issues of the particular battle from an overall perspective.

USS Enterprise, a Yorktown-class aircraft carrier saw action in some of the fiercest battles ever fought in modern warfare. Affectionately known as “Big E” by its crew, the Enterprise was the only carrier to be involved in every major naval engagement of the Pacific theatre – from Midway and Santa Cruz through to Saipan and Leyte Gulf.

HISTORY™ puts viewers in the middle of the action with stunning  cutting-edge CGI animation and the latest technology to present a 360-degree view of the battlefield.

Battle 360 follows the service of the Enterprise in chronological order over 10 episodes which were titled:
Call To Duty / Vengeance At Midway / Jaws Of The Enemy / Bloody Santa Cruz / Enterprise Vs. Japan / The Grey Ghost / Hammer Of Hell / D-Day In The Pacific / Battle Of Leyte Gulf / The Empire's Last Stand

The Army of General George S. Patton Jr., the scourge of the Nazis in North Africa and Europe. From his epic campaign against Erwin Rommel’s Afrika Korps to the invasion of Sicily and the crossing of the Rhine in the war’s final stages. Gain insight into Patton’s renowned character, brilliant military mind and how that influences the history of World War II.

Patton 360 follows the battle in chronological order over 10 episodes which were titled:

All 20 episodes and some exclusive bonus features of running time 971 minutes are included in this DVD 7 disc collection.