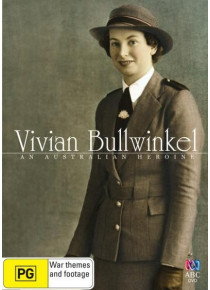 DVD titled ' Vivian Bullwinkel: An Australian Heroine ' ABC Presentation DVD. Vivian Bullwinkel is one of the great Australians of the 20th Century. Bullwinkel lived life to the full; as a Second World War Australian army nursing sister, a POW, a survivor and as a beloved matron. She was also highly regarded in the community as an elder states woman of Australian nursing.

Viv Bullwinkel, during the WWII, was a member of the 2/14 2/13 Australian General Hospital Singapore before escaping just before the Fall of Singapore and later being captured by Japanese in Sumatra .
Includes Special feature : The Making of Vivian Bullwinkel