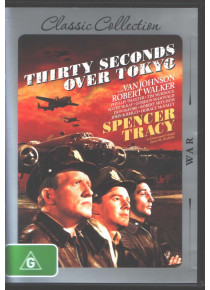 Thirty Seconds Over Tokyo is a 1944 American war film released by Metro-Goldwyn-Mayer. It is based on the true story of the Doolittle Raid, America's first retaliatory air strike against Japan four months after the December 1941 Japanese attack
on Pearl Harbor. Mervyn LeRoy directed Thirty Seconds Over Tokyo and Sam Zimbalist produced the film. The screenplay by Dalton Trumbo was based on the 1943 book of the same name, written by Captain Ted W. Lawson, a pilot who participated in the raid. In both the book and the film, Lawson gives an eyewitness account
of the training, the mission, and the aftermath as experienced by his crew and others who flew the mission on April 18, 1942.
Lawson piloted "The Ruptured Duck", the seventh of 16 B-25s to take off from the aircraft carrier USS Hornet - theirs is the plane that nearly goes into the drink - as they forgot to put down the flaps!﻿
Click on Videos Tab Above to see movie trailer