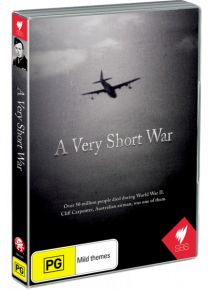 A Very Short War - As Seen on Foxtel ABC SBS

A VERY SHORT WAR is a deeply personal story – one that resonates with every single name found chiselled into the memorial monuments scattered throughout the world’s cities and country towns.
Click here to see a release interview of A Very Short War
It revolves around the short life of Jack Clifford (Cliff) Carpenter, a pioneer Australian aviator – a man who designed and built his first aeroplane as a teenager and sadly lost his life at the age of 28 in the darkening skies over Norway on the day of the German invasion. He left behind a grieving mother and father, a brother, two sisters and an enduring family legacy.

Through his letters home we are exposed to a fascinating and intriguing insight into the spirit of the times as World War 2 beckoned. A Very Short War is not the story of a hero, yet it is truly heroic. It is a heartening story of great loss as it follows the quest by the nephew Cliff never knew to unravel the truth behind the ultimate sacrifice made in a lonely place far from home. ﻿