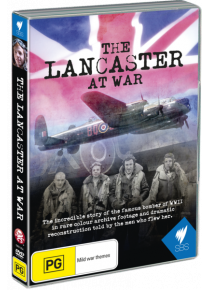 This is the Story of the magnificent WW2 Bomber the Lancaster. Thousands of RAAF Australian flight crew flew in this Bomber icon during WW2. Ahead of its time in many respects it was a highly regarded fighting machine. This Military DVD explores the many facets of this Legend Aircraft.

It become known as the 'HEAVY' Bomber being the only plane capable of carrying the 22,000 lb ‘Tallboy’ bombs. Remarkable exclusive stories direct from the aircrew veterans who are interviewed in this documentary DVD.