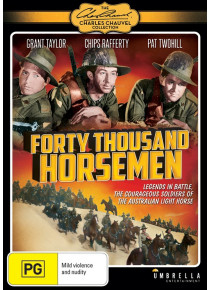 The film depicts and is based on the Australian Light Horse battles during WW1 of which three are shown during the movie, Romani, Gaza and the famous Charge at Beersheba.

The Australian Light Horse fought in the deserts of the Sinai and Palestine predominately﻿ against Turkish Ottoman Empire forces. It follows the adventures of the three heroes (Australian Lighthorsemen Troopers).

The movie culminates at the Battle of Beersheba in 1917.

It was released in 1940 to a huge box, the Sydney Morning Herald claimed that "there have been some good Australian films before this one, but Forty Thousand Horsemen has every right to be regarded as the first really great Australian picture﻿.﻿

Fully Restored and presented in a brand new digital transfer.