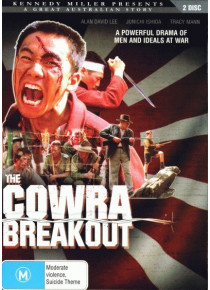 DVD doco movie depicting the events of August 1944 when 1100 Japanese prisoners launched a mass escape from the POW camp which was located on the outskirts of Cowra NSW.
Four guards are killed in the escape, and 231 prisoners die by wounds sustained or suicide, while 334 prisoners are recaptured over the subsequent nine days. From legendary Australian mini-series production house Kennedy Miller.﻿