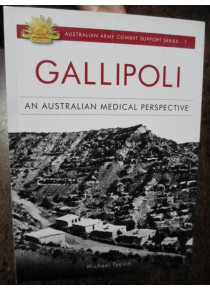 When Australia entered the First World War in 1914, the Army Medical Services (AMS) had only recently been raised after the federation of the Australian colonies in 1901. Like the rest of the 1st Australian Imperial Force (AIF), the AMS was largely an untested organisation of volunteers based on a small cadre of professionals.

The prime function of the AMS was to maintain fit and healthy troops at the front or during operations, and to return the sick and injured to duty as soon as possible.

The Gallipoli campaign overwhelmed the Service with casualties. It would be some months before the Service could truly accomplish an acceptable standard of care - even for World War One. Initially, the wounded were taken from Gallipoli to Egypt by Hospital ship but this was inadequate causing the loss of many lives at sea. The 3rd AGH Australian General Hospital was moved to the island of Lemnos to be closer to the war. More equipment, doctors, nurses were urgently acquired from Australia. Communications at the time were primitive, while general staff officers had little understanding of their own army’s medical assets or the needs of a large medical organisation.
A nice book to research more about the Anzac Girls life and times.