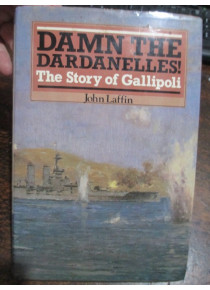 Damn The Dardanelles the Agony of Gallipoli by Laffin

Damn the Dardanelles The Agony of Gallipoli by John Laffin ﻿

This military book is Laffin's critical account of the Australian Battle at ANZAC Gallipoli.

Damn the Dardanelles ' by John Laffin
Much more than another account of the Famous Gallipoli Battle . Laffin, an Australian
Historian, researched hitherto unpublished material and illustrations. Combined
with an intimate knowledge of the Gallipoli Peninsula and Battle he has produced
a challenging analysis of the whole campaign . Laffin declares that, &quot;The
purpose of the book is to apportion blame and to let the soldiers speak&quot;.
John Laffin was a longtime member of the veterans' Gallipoli Association. An Australian
soldier himself in World War Two, he has a life long association with Gallipoli
as his mother served there as a army nursing sister. Since a small boy he heard
much about the war from her and her many Gallipoli veteran friends. His Father
also served with 20th Battalion Western Front. Numerous illustrations .

All Australian Battles covered including the famous Lone Pine , the Nek Chunuk Bair Hill 60 Anzac Landing Helles Kritha +++one of the more sought after of the Laffin library.