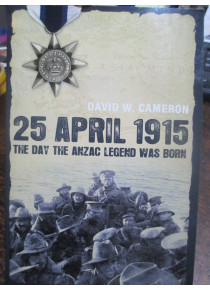 This war book is one of the best history books devoted to the Australian ANZAC operations during the first day at Anzac Cove.

A detailed account of what happened to the Australian, New Zealand and Turkish troops on the beaches and hills of the Gallipoli peninsula on that fateful day - the day the ANZAC legend was born.

On the 25th of April 1915 Australian troops landed on the Gallipoli Peninsula in what is now called Anzac Cove. They rushed from the beach up to Plugge's Plateau and into Australian military history. Just after midday troops from New Zealand landed at Gallipoli and together the Australians and New Zealanders created the Anzac legend. It was the events of this first day that set the course of the whole battle leading to the evacuation of the Anzac troops in December 1915.
This is the story of that day telling the Australian, New Zealand and Turkish side of what was to become a tragedy for all three countries and an ultimate triumph for Turkey. The book has much detail about the to and foe battles for ground on the first day also lists much consideration if who went where and furthest advance. It concludes with the visit of Charles Bean, the official Australian war correspondent, to the peninsula in 1919 as part of the Australian Historical mission to organise the burial of the dead that had lain exposed to the elements for the last four years, and to the formation of the cemeteries that are today visited by thousands.
Other Gallipoli books By David Cameron

Gallipoli: The Final Battles and Evacuation at Anzac
The Battle for Lone Pine Four Days of Hell at the Heart of Gallipoli
Our Friend the Enemy
Shadows of Anzac
The August Offensive