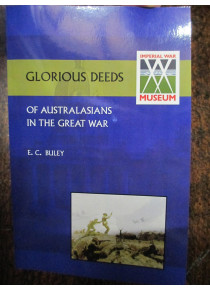 Glorious Deeds of Australasians in the Great War

Glorious Deeds of Australasians in the Great War, by by E. C. Buley﻿

Burley was from Ballarat in Victoria but was located in London during 1915. He saw an opportunity to interview many of the Australian Gallipoli wounded being cared for in London Hospitals. He set about collecting their stories and wrote this book which was published in October 1915 -  it was said to be the, '1st Anzac Book'.
It was highly successful and received much praise﻿.

Glorious Deeds was reprinted three times before the end of 1915, a revised enlarged edition was printed within weeks of the Gallipoli evacuation.﻿

Written with old age charm this book has been referenced by many Authors over the years.