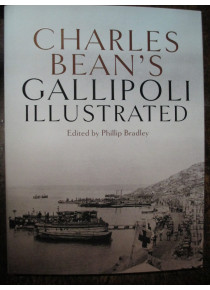 This book draws on original photography from over a dozen private collections. Many have not been shown before in a book. The photographs illustrate excepts from  Charles Bean personal diary. Bean served as the Official Australian War Correspondent from the landing to the evacuation. He lived in a dugout at Anzac Cove and visited the frontline on a daily basis.

Thus, Charles Bean was able to dedicate his days and nights to witnessing and recording the events that would form the Anzac legend. In writing his diaries, Bean also provided an extraordinary insight into his own emotions - his joys and sorrows, hopes and fears, loves and hates - and those he admired or disdained, the heroes and villains of the Anzac story. Charles Bean's Gallipoli extracts the essence of Gallipoli from his diaries and rewards the reader with a clearer understanding of what it was like to live and die there. In this rather large collectable hard cover edition his diary entries are coupled with photographs taken in 1915.

Charles Bean's Gallipoli also showcases a remarkable collection of photographs, the majority of which were obtained from the private collections of soldiers who took their cameras to war. Most of these photographs, selected to illustrate Charles Bean's diary extracts, have not previously been published and provide another fascinating perspective on the Gallipoli campaign. ﻿