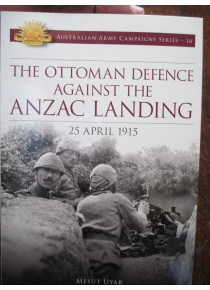 The Ottoman Defence Against The Anzac Landing No 16

The Ottoman Defence Against The Anzac Landing by Mesut Uyar﻿

Written by Turkish Author, Mesut Uyar who graduated from the Turkish Military Academy in 1991. ﻿

The Landing at Gallipoli on 25 April 1915 represents a defining moment, not only for Australia and New Zealand, but also for Turkey.

However a detailed account of the landing from the Turkish perspective has yet to be published in English despite the 100 years that has elapsed since the first ANZACs scrambled ashore.

Descriptions of the Ottoman forces such as the composition of units, the men who commanded them, their weapons, capabilities and reactions to the ANZAC invasion have generally remained undocumented or described in piecemeal fashion based on secondary sources. The lack of a Turkish perspective has made it almost impossible to construct a balanced account of the events of that fateful April day.

The Ottoman Defence against the Anzac Landing: 25 April 1915 seeks to redress this imbalance, portraying the Ottoman experience based on previously unpublished Ottoman and Turkish sources. This meticulously researched volume describes the Ottoman Army in fascinating detail from its order of battle, unit structure and composition, training and doctrine to the weapons used against the ANZACs. Using Ottoman military documents, regimental war diaries, personal accounts and memoirs, author Mesut Uyar describes the unfolding campaign, unravelling its complexity and resolving many of the questions that have dogged accounts for a century.

This valuable chronicle will enhance readers’ understanding of the Ottoman war machine, its strengths and weaknesses and why it proved so successful in containing the Allied invasion. Detailed maps and photographs published for the first time add clarity and portray many of the men the ANZACs referred to with grudging respect as ‘Johnny Turk’.