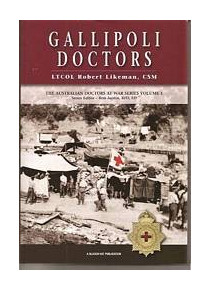 Gallipoli Doctors is the first volume in the series Australian Doctors At War, the second volume was released in 2012 and covers the Australian Light Horse campaigns in Egypt and Palestine as well as the Naval and Military Force sent to German New Guinea in 1914-1921. The book has a list by units including brief summary history of the various AIF medical units involved.

An alphabetical list in unit format of Doctors who served in the Dardanelles. Index. Approx 300 doctors mini-biography details listed in what could be called a "who's who" of Gallipoli Doctors.