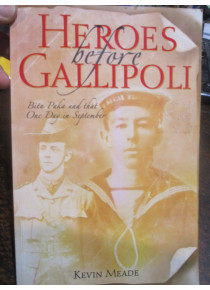 Heroes Before Gallipoli Bita Paka﻿﻿ and that One Day in September By K. Meade

'Heroes Before Gallipoli - Bita Paka and that One Day in September '
by K.Meade.

Seven months before the troops landed at Gallipoli, a force of 2000 Australian volunteers sailed to Rabaul New Guinea to capture Germany's interests in that Country. That force was known as Australian Naval and Military Expeditionary Force (AN&MEF). One of the members of this force a sailor from Melbourne became the nation's first casualty of World War I. Able seaman William 'Billy' Williams was shot in the stomach and mortally wounded while en route to capture a German wireless station at Bita Paka, near Rabaul. The date was September 11, 1914.

One ten days later, and with no further fighting, all of German New Guinea was formally surrendered to Australia. What history book have until now dismissed as a 'skirmish' led to a huge expansion of Australia's interested in the islands to its north. The New Guinea campaign also saw a number of significant 'firsts' for Australia, including the first overseas military expedition planned and coordinated by the fledgling nation, the first land operation of the war, the first joint operation by the Army and Navy, and the war's first bravery award for an Australian. 'Heroes Before Gallipoli' is a detailed account, told through the eyes and in the words of the soldiers and sailors who took part in it. Many had been civilians only weeks earlier and some showed extraordinary heroism. Their deeds have been largely overshadowed by the later carnage at Gallipoli and on the Western Front, but the men who fought at Bita Paka on that one day in September have earned their place in Australia's history.

Now their sacrifices will be remembered.