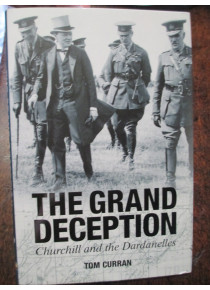 The Grand Deception Churchill and the Dardanelles by Tom Curran

The Grand Deception Churchill and the Dardanelles by Tom Curran

The century that has elapsed since the 1915 Dardanelles campaign has done little to quell the debate that rages over its inglorious end.

The origins of the campaign are likewise the subject of ongoing scrutiny, particularly the role of the First Sea Lord Winston Churchill, with whom the ill-fated campaign has been closely identified. Tom Curran's The Grand Deception: Churchill and the Dardanelles presents a detailed examination of Churchill's role in the decision-making process that led to the Gallipoli landings.

Using unpublished British archival sources and a range of additional material, both contemporary and modern, Curran's meticulous research casts new light on the lead-up to a campaign that would profoundly affect Australian military history.﻿