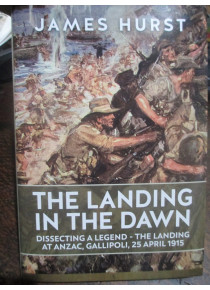 The Landing in the Dawn - Landing at Anzac 1915

The Landing in the Dawn Dissecting a Legend - the Landing at ANZAC, Gallipoli, 25 April 1915 by J Hurst

The Landing at the Dawn: Dissecting a Legend - The Landing at Anzac, Gallipoli, 25 April 1915, re-examines and reconstructs the Anzac Landing by applying a new approach to an old topic - it uses the aggregated experience of a single, first-wave battalion over a single day, primarily through the investigation of veteran's letters and diaries, to create a body of evidence with which to construct a history of the battle. This approach might be expected to shed light only these men's individual experience, but their accounts surprisingly divulge sufficient detail to allow an unprecedented reconstruction and re-examination of the battle; it effectively places much of the battlefield under a microscope. The use of veterans' accounts to re-tell the story of the Landing are not new. Anecdotes have for many years been layered over the known history, established in C.E.W. Bean's Official History of Australia in the War, The Story of ANZAC, Volume I, to colour narrative.

Here, detail extracted from an unprecedented range of primary and secondary sources, is used to reconstruct the history of the day, elevating participants' accounts from anecdote to eye-witness testimony. This shift in the way evidence is used to re-draw the foundation of the day, rather than simply painting it into the existing canvas, changes the way the battle is interpreted.

Even though more than 100 years have passed since the Landing, and well over 1,000 books written on the campaign, much can be learned by returning to the "primary source, the soldier." The Landing has not previously been studied at this level of detail. This work complements Bean's, by adding new evidence and digging deeper than Bean had the opportunity to do. It potentially re-writes the history of the Landing.