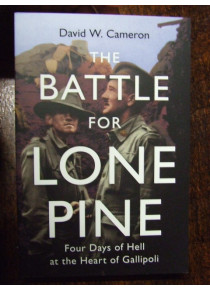 The Battle for Lone Pine Four Days of Hell at the Heart of Gallipoli
by D.W. Cameron  - new book

This war military book Battle Lone Pine by David Cameron is his 4th on the Battles at Gallipoli.

Over four days in August 1915, Australians and Turks were thrown into some of the fiercest fighting of the war, on a small plateau in Gallipoli known as Lone Pine. Thousands of lives were lost. Seven of Australia's nine Gallipoli VCs were earned during brutal hand-to-hand combat in dark tunnels and in trenches just metres apart, bombarded by terrifying volleys of grenades.

The Battle for Lone Pine is the first book devoted to this cornerstone of the Anzac legend, drawing on unforgettable first-hand accounts scratched into diaries and letters home. The stories of the diggers, as well as the engineers, nurses, sappers, commanders and more, provide an invaluable record of the battle and serve as moving testimony to their courage in appalling conditions.

Today, pine trees are planted in remembrance around Australia. In Gallipoli, the Lone Pine Cemetery and Memorial attracts large crowds to commemorate Anzac Day. David W. Cameron's absorbing history reveals the fate of those who fought on the ground around the Lone Pine Memorial.﻿ Cameron has written several books on the Battles at Anzac including 25th April 1915 The Day the Anzac Legend was Born and Gallipoli the Final Battles and Evacuation of ANZAC.